By netionaldastak
June 22, 2022
0
12
Share
Facebook
Twitter
Pinterest
WhatsApp
Public art makes for a prominent part of culture in any society. Qatar is no different. Since over a decade, Qatar Museums has been pushing the boundaries of traditional museum format and offering cultural experience in open spaces.

In fact, the gulf nation has been consciously expanding its public arts program by adding new works, with a clear intent to turn the country into a “vast outdoor museum” ahead of the Soccer World Cup in 2022. So if you happen to be traveling to Qatar and have art on your mind, we recommend that you include a visit to some of these iconic art spaces to your itinerary: 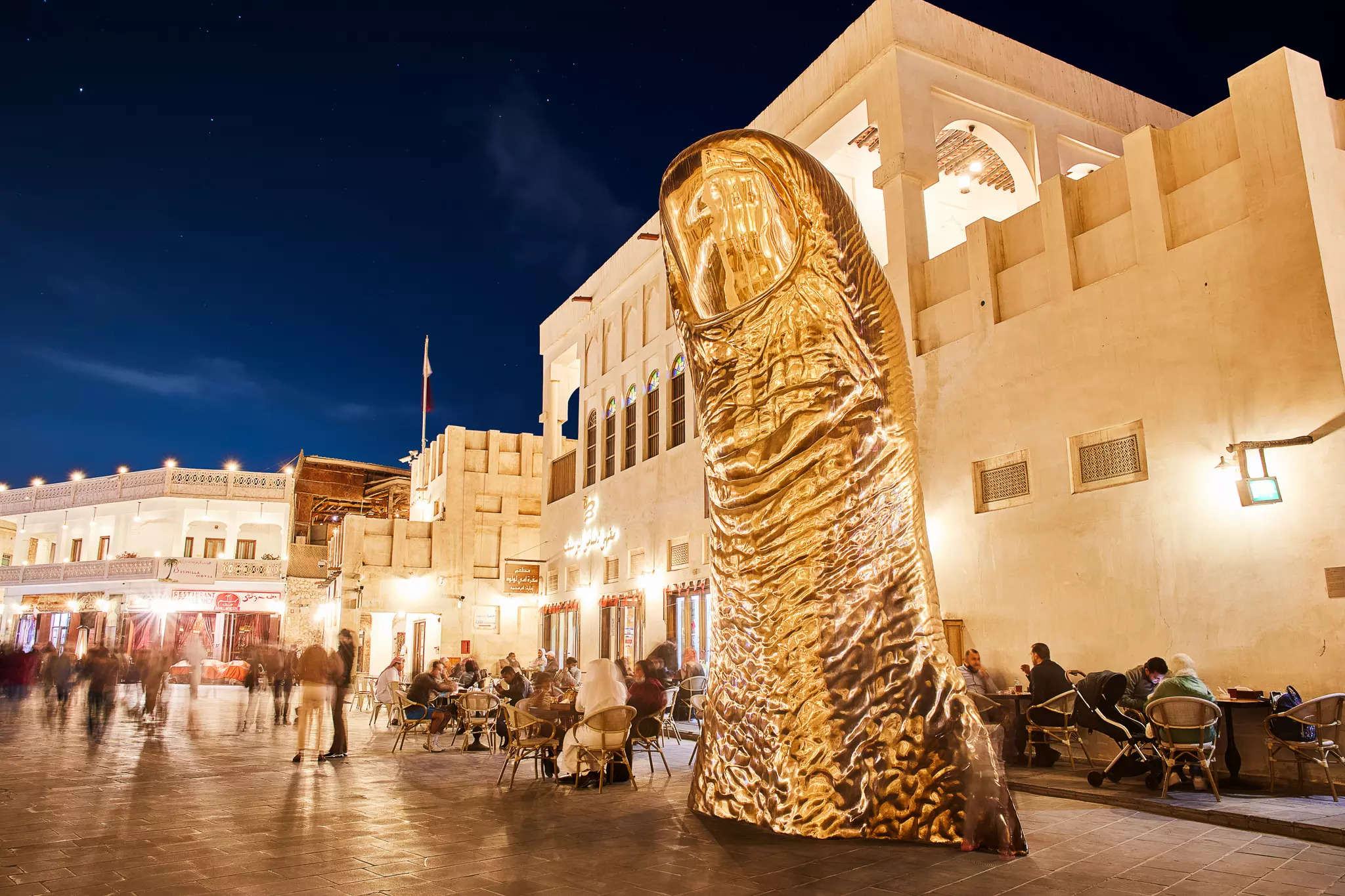 Pouce: Located in Souk Waqif, Doha’s century-old trading market, Pouce by the French sculptor César Baldaccini is a giant thumb marking a crossroads in Souq Waqif. Cast in the shape of the artist’s own thumb, the highly polished bronze patina of the installation reflects the surrounding light, and makes for a quirky addition to the traditional marketplace. If planning a visit, you could consider taking the Doha Metro at Ras Bu Aboud to the Souq Waqif station. 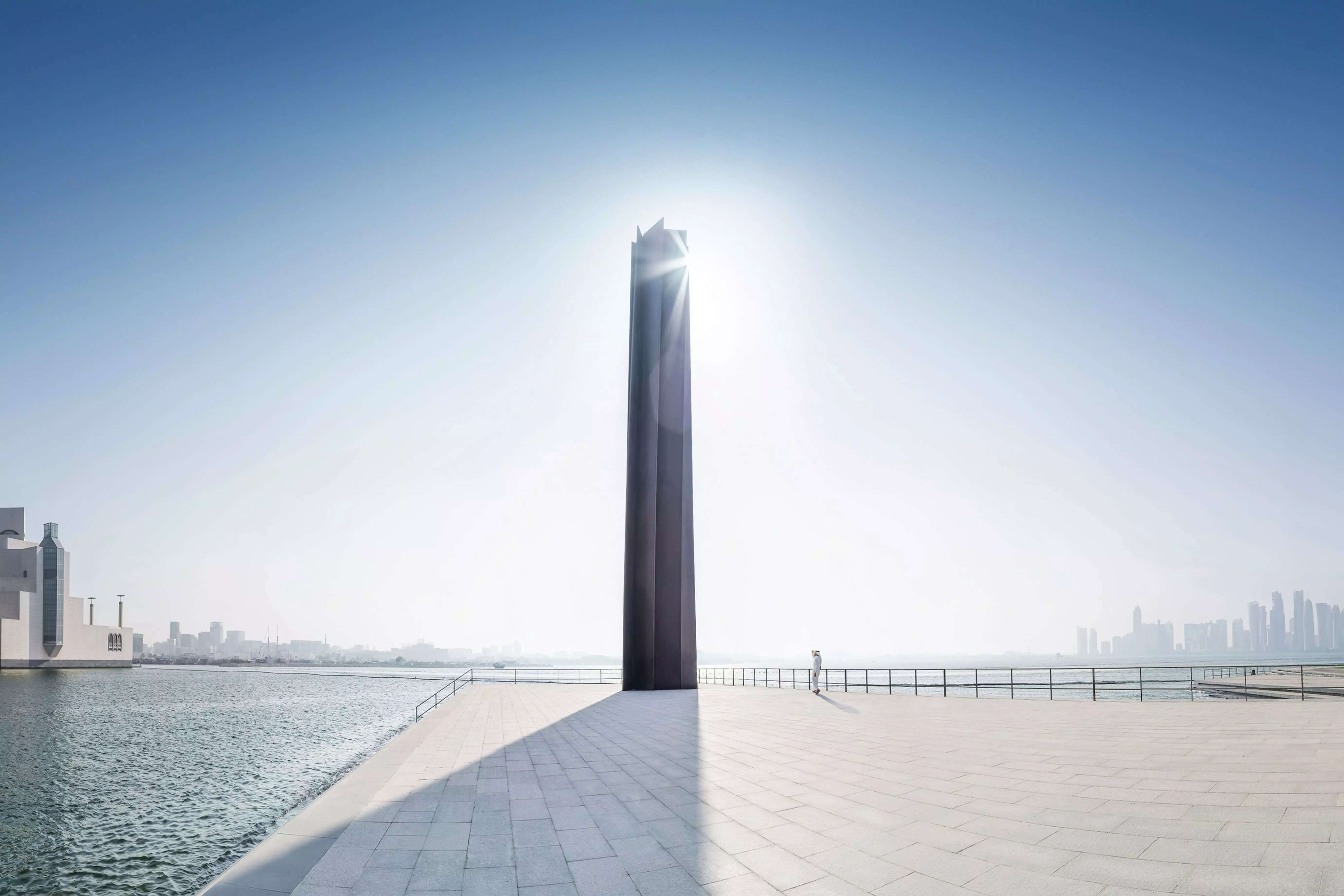 7: Number 7 holds great spiritual significance in the Islamic Culture. Paying homage to this significance is an American artist and sculptor Richard Serra’s masterpiece – Seven. 250-metre-high weathered steel plates molded together in a heptagon to mount the tallest public art installation the artist has ever made. Located at the Museum of Islamic Art (MIA) park, this public art installation was first unveiled to the public in December 2011 after three years of construction. The art piece is Serra’s second installation in Qatar followed by the famous sculpture, East-West/West-East in the desert north of Doha, and is considered one of the best works by the legendary artist. 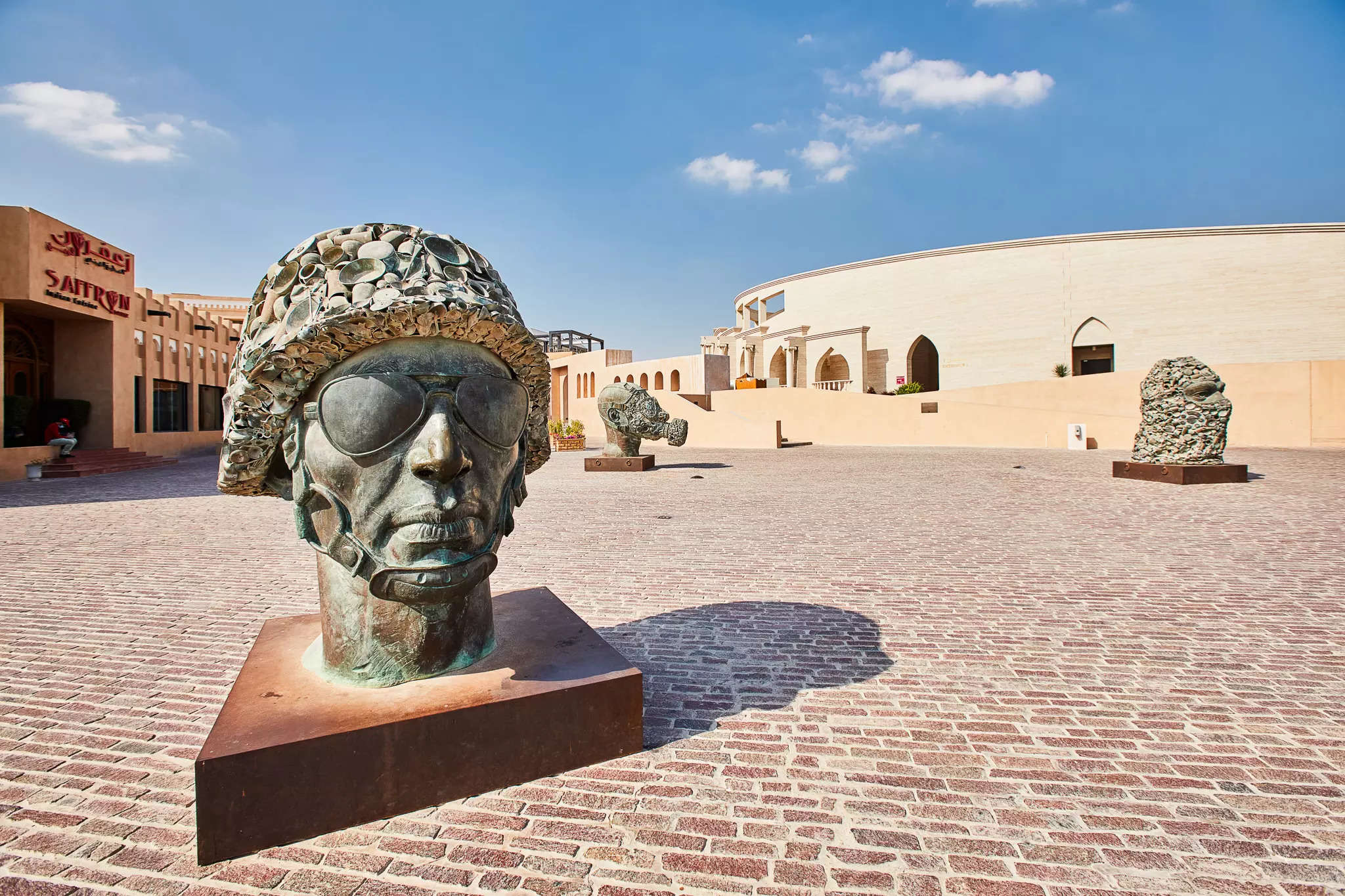 Each art piece, which tackles the challenging themes of war and peace, is made up of cooking instruments, used pails, traditional Indian lunch boxes, and glass bowls. Holistically, the public art is inspired by Mahatma Gandhi’s visual metaphor of the three wise monkeys which represents the proverb ‘see no evil, hear no evil, speak no evil’. 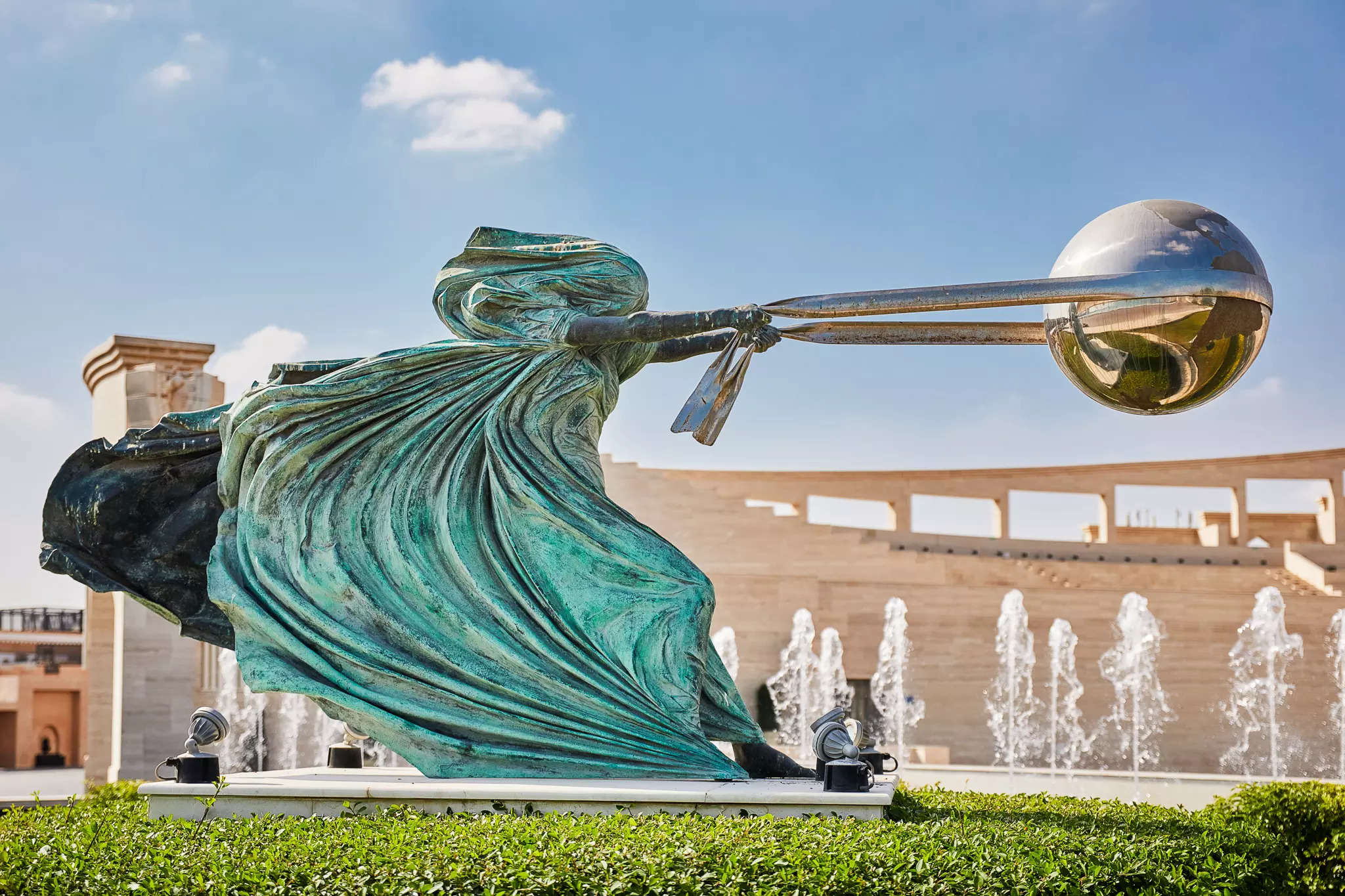 The Force of Nature II: Further into the heart of the Cultural Village is the landmark 5,000-capacity Katara Amphitheatre, which was created to combine the classical Greek theater concept and Islamic features. Situated right in front of this Amphitheatre is a large sculpture crafted from bronze, stainless steel, and aluminum by Italian contemporary artist, Lorenzo Quinn, depicting a woman hurling a planet in circles. Titled, The Force of Nature II, Quinn is said to have made the art piece as a dedication to Mother Nature as well as a reminder of nature’s power and humanity’s responsibility to Earth. The public art piece was unveiled in Qatar in October 2011. The Katara Cultural Village is easily accessible by car. Doha Metro is another good way to reach there. 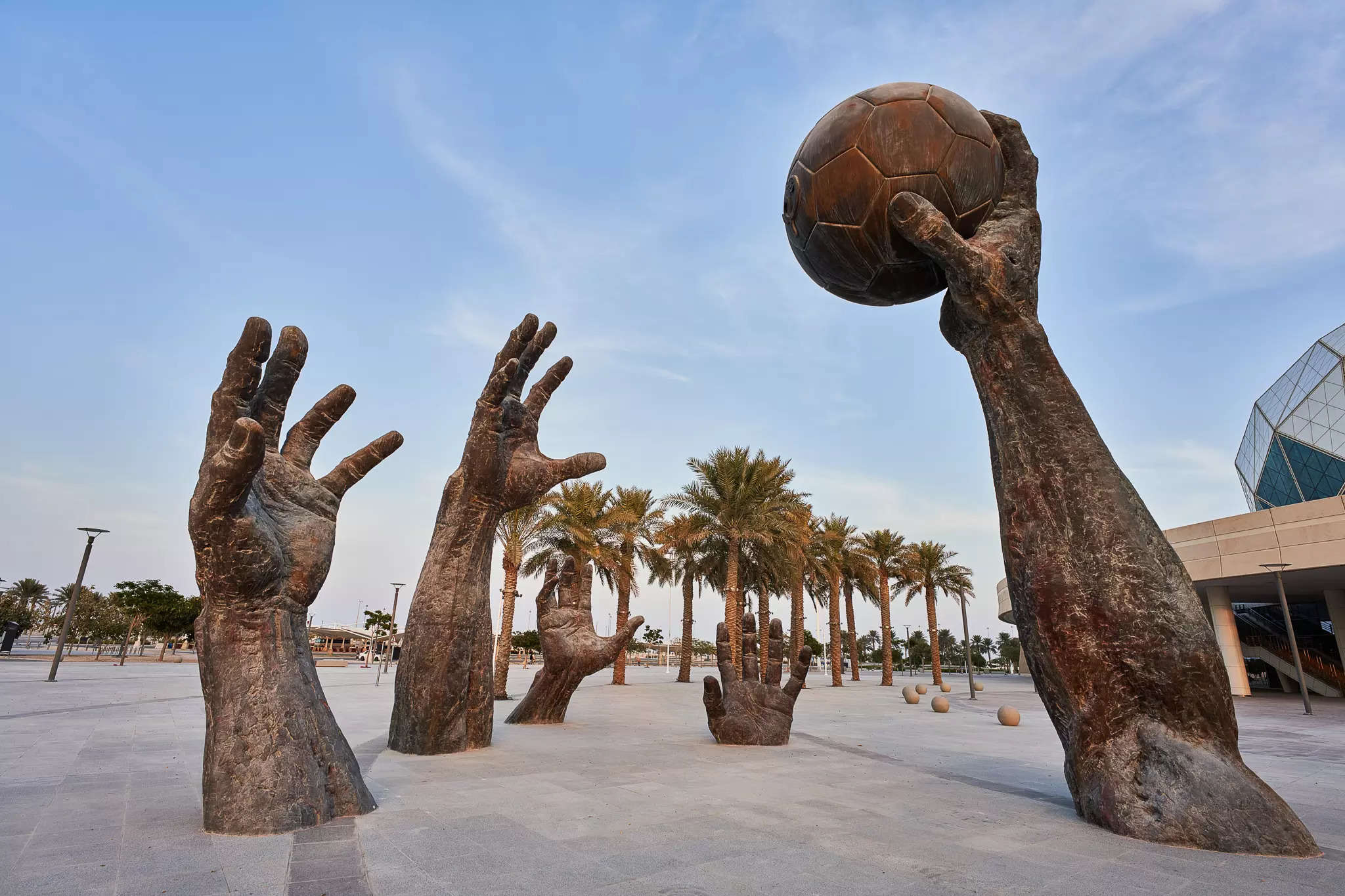 The Challenge 2015: A series of bronze sculptures depicting larger-than-life hands reaching for the sky, The Challenge 2015 by Ahmed Al Bahrani, can be seen at the Lusail Multi-Purpose Hall. Rising from the concrete to create a seemingly ongoing handball match, the sculptures in various sizes were commissioned to celebrate Qatar’s hosting of the Men’s Handball World Championships in 2015. The artist, who is known for large-scale and thought-provoking art pieces, once revealed that he took up a personal challenge against himself and time to finish this iconic and significant piece in just five months. 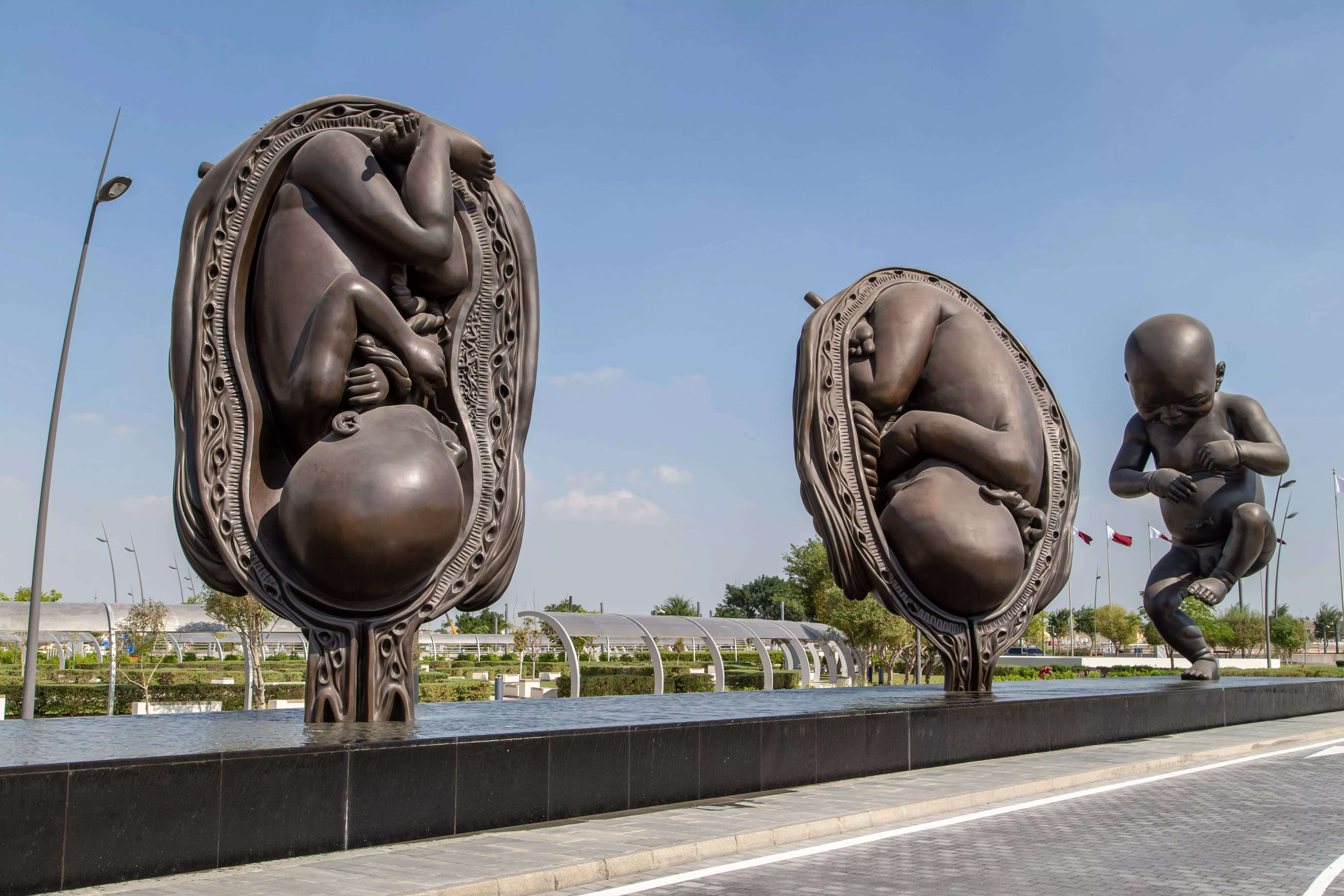 The Miraculous Journey: Created by Damien Hirst, The Miraculous Journey is significantly placed at Sidra Medical and Research Centre, a state-of-the-art facility dedicated to providing care for women and children in Qatar. The striking series of large-scale artworks, comprising 14 monumental bronze sculptures, illustrate each stage of the development of a fetus. These structures end with a statue of a 14-metre tall anatomically correct baby. Officially unveiled in 2013, The Miraculous Journey is a prominent artwork in Qatar. You can get to the medical center by car. The nearest metro station is situated near Qatar National Library. 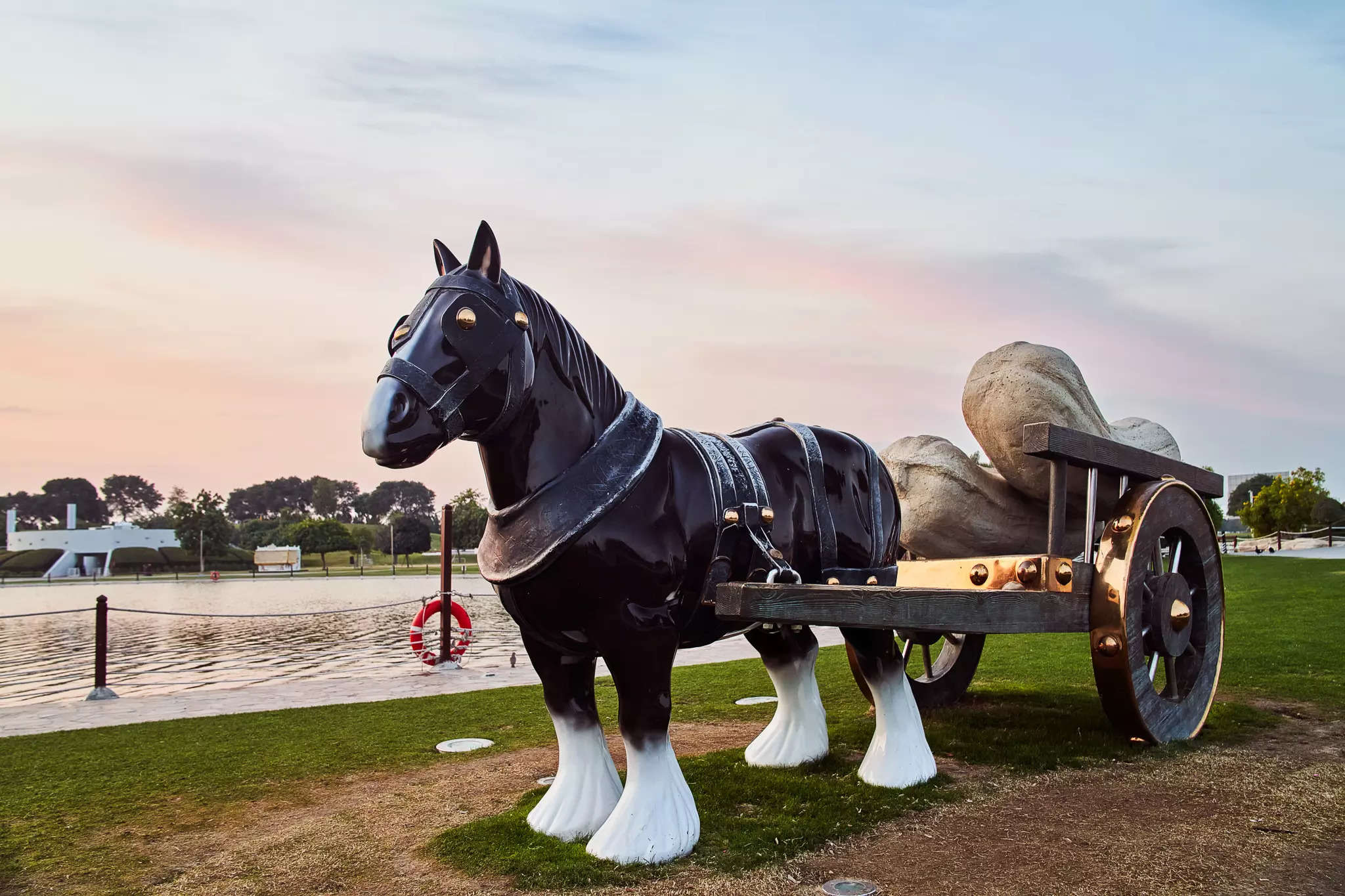 Perceval: Overlooking the lake in Aspire Park, Perceval is made by English Artist Sarah Lucas as a tribute to British culture. The life-size sculpture depicts a shire horse with a cart of giant marrows hitched on its back. The marrows on the cart are crafted from cement to contrast the polished and painted bronze material used in the artwork. Aspire Park can be reached by car and through the Aspire Park Metro Station by taking the Gold Line. 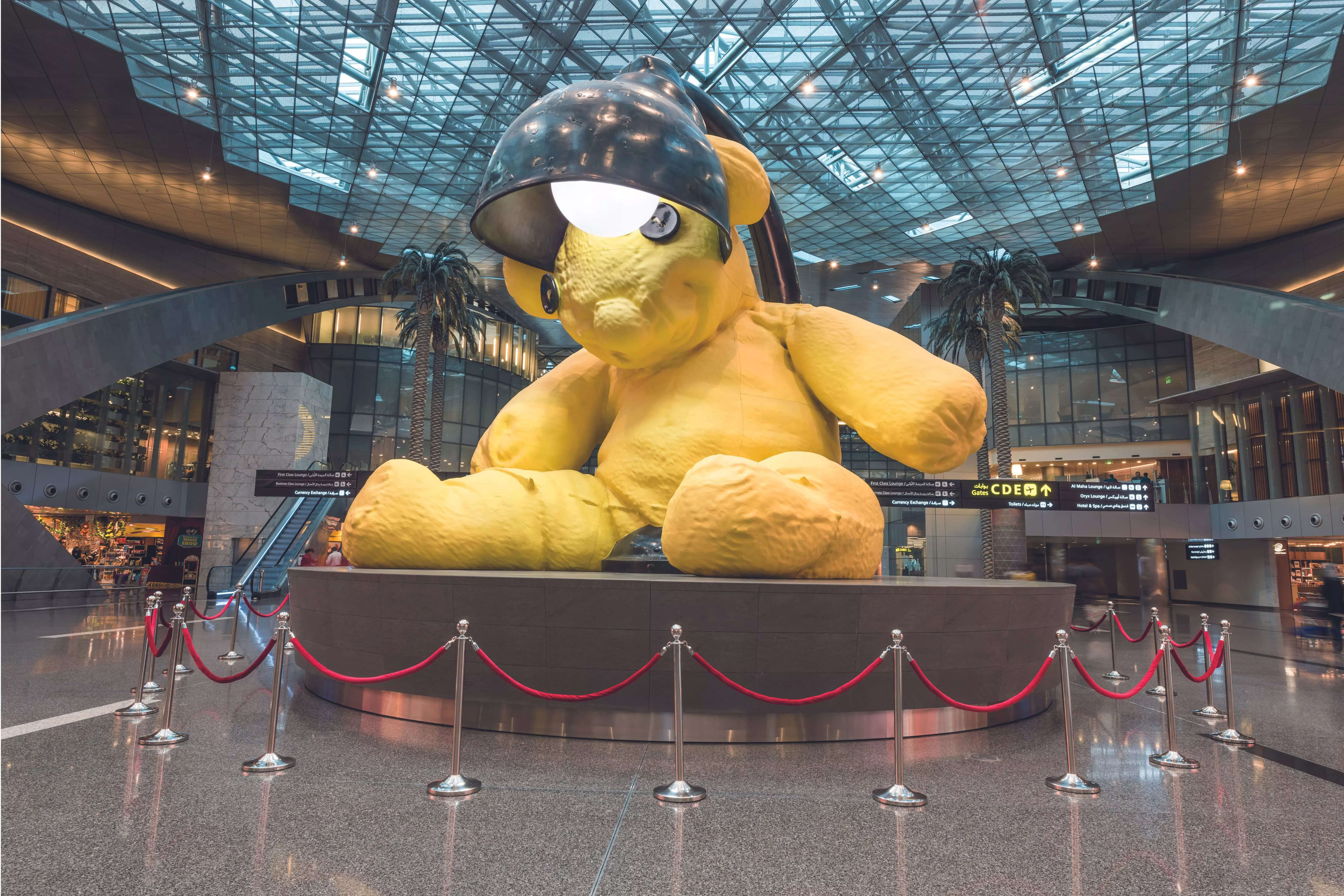 Lamp Bear: A plush 23-foot yellow teddy bear sculpted from bronze by Urs Fischer sits under a lamp at the duty-free center at Hamad International Airport. Both humorous and comforting, the piece reminds travelers of childhood or precious objects from home. 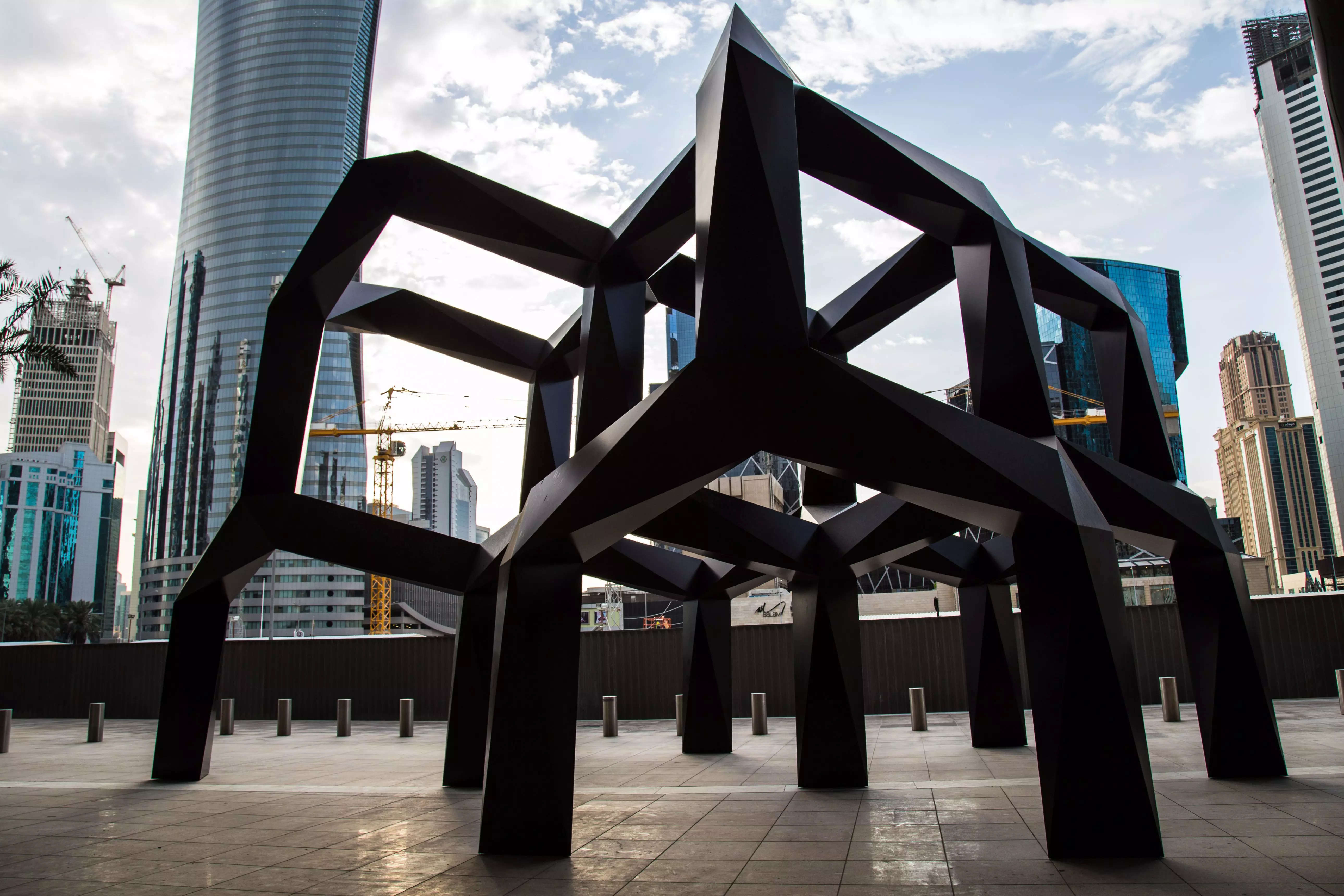 Smoke: Designed in 1967 by American artist Tony Smith, the geometric combinations of Smoke serve as an artistic ode to the creator’s fascination for geometry and organic shapes. Standing 24-foot tall, a two-tiered aluminum structure of geometric components matches the dynamic environment of the Doha Exhibition and Conference Center (DECC). It is said that the title Smoke appealed to Smith due to “the complex spaces created within the sculpture, in which its logic disappears, like smoke.” The artwork and the artist also made it to the October 1967 cover of TIME Magazine.