Persisting with his attacks on the Bharatiya Janata Party (BJP)-led Centre, Telangana chief minister K Chandrashekar Rao (KCR) has expressed unhappiness over the “regressive” farm policies adopted by the union government. The central tactics are dampening the agricultural growth of the country, which relies on farming as the main occupation, he alleged.

It is unfortunate, said the CM, that the Centre’s haphazard policies are discouraging the farmers from continuing with agriculture and also reducing the farm output of the country.

The Telangana Rashtra Samithi (TRS) leader has been making repeated efforts at stitching together an ‘anti-BJP’ front to take on the Narendra Modi government at the Centre.

In view of the ensuing Vanakalam (Kharif season), beginning in a few months, KCR asked state agriculture minister S Niranjan Reddy and officials at Pragati Bhavan on Tuesday to make all necessary arrangements in advance.

He suggested going for cotton, chilli, red gram, watermelon, and other alternative crops in the Kharif season.

KCR reviewed the availability of fertilizers and seeds, and the agriculture department’s readiness to make other farm-related arrangements.

The chief minister said that the farm sector is playing a key role in the strengthening of the state economy.

“The extension of Pranahita and Kaleshwaram (irrigation plan) is in progress and all the projects taken up by the state government will be completed in a year. The question of drought in agriculture would not arise in the future and it is imperative that the state agriculture department should be vibrant, fast, and always busy,” he said.

He also urged for reducing the indiscriminate use of fertilizers and asked officials to educate farmers about scientific methods.

With the ongoing Russia-Ukraine war, the chief minister said that the availability of di-ammonium phosphate will be affected as the two countries supply the raw materials for DAP fertilizer.

Reviewing the government’s flagship program Dalit Bandhu, the CM instructed officials to take measures fast in the distribution of benefits to those eligible.

Secretary in the chief minister’s office (CMO) Rahul Bojja informed KCR that the benefits of the scheme had already been given to 25,000 beneficiaries. On average, 400 people are availing of the benefits a day, he said.

The chief minister told the officials to fix a target to extend the Dalit Bandhu scheme to two lakh beneficiaries this financial year.

“The state is being applauded across the country for the successful implementation of Dalit Bandhu. The outcome of the scheme is overwhelming and draws profit from each rupee spent as an investment under the scheme. Dalit Bandhu is a social investment and also helped improve the economy,” KCR said.

The scheme helps Dalit youth to come out of hardships and take part in business activities.

KCR also visited the new secretariat under construction and reviewed the work in progress with officials. He instructed them to ensure adequate safety measures and build the structure as a “wonderful monument”.

Stacey Abrams says Georgia ‘the worst state in the country to live,’ despite owning multiple houses there 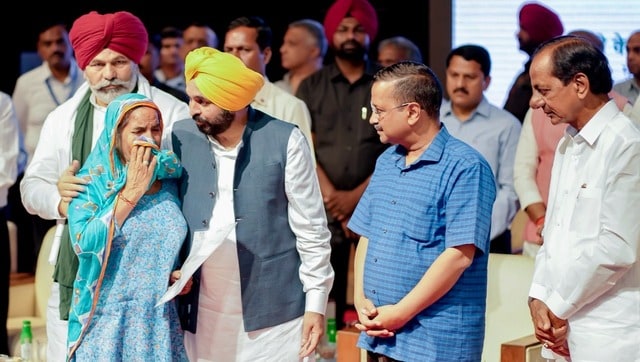