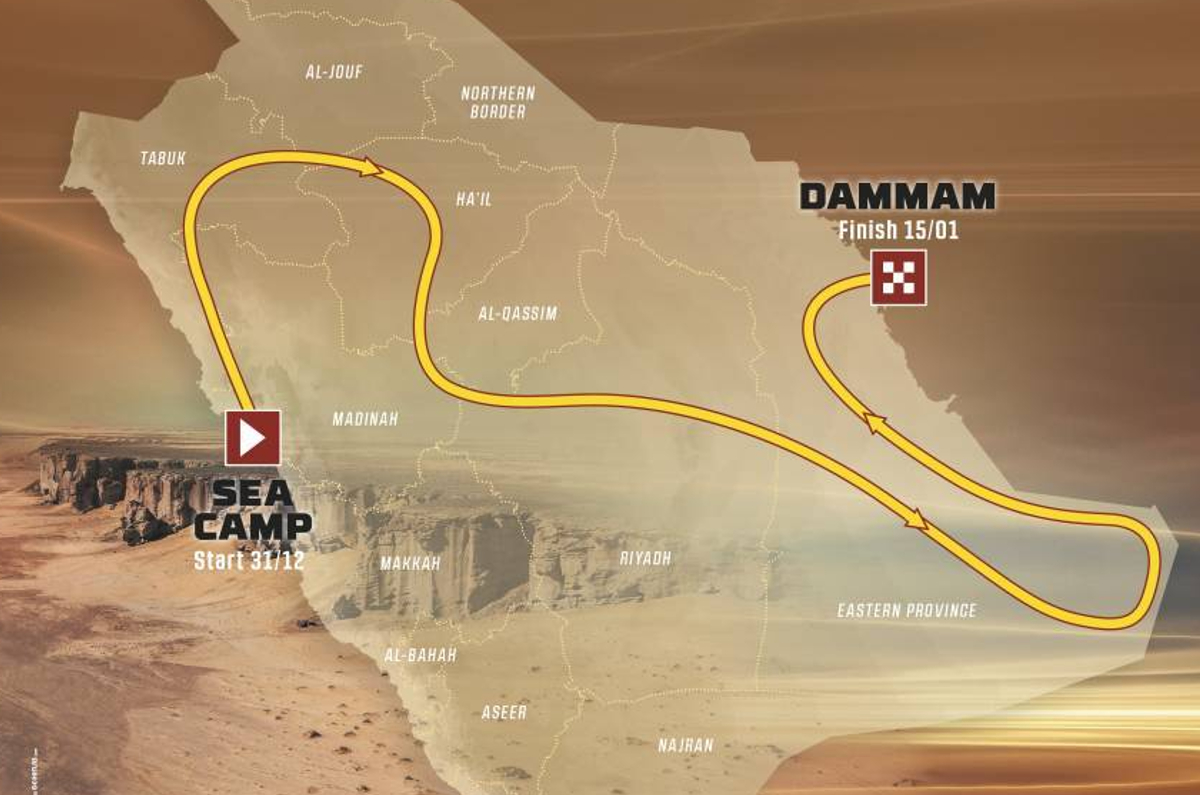 With a total of almost 5,000km in special stages, the 2023 Dakar Rally will feature the longest distance of competition since 2014.

The 2023 Dakar Rally will run from January 1-15, after a prologue stage on December 31, 2022. For the fourth year running, the event will be held entirely in Saudi Arabia. However, organizers have now extended it to 14 Stages for the first time since the 2018 edition that was spread across Peru, Bolivia and Argentina.

Some rule changes have been announced as well, including a new time bonus for bike competitors, mirror routes and more.

Dakar Rally organizers ASO (Amaury Sport Organization) say the new route that takes competitors from the west to east coast of Saudi Arabia is “70 percent new”. While they haven’t revealed exactly how much distance will be covered, they have stated that the majority of the special stages will be close to 450km. In total, with almost 5,000km of special stages, the 2023 Dakar Rally will feature the longest distance of competition since 2014. The liaison sections between the stages will be shorter, with finish lines closer to the bivouacs, which will reduce liaison times.

The rally will kick off from the beaches of the Red Sea on January 1 and conclude on the sands of the Arabian Gulf in Dammam on January 15. A total of three days will be spent in the Empty Quarter – a desert larger than France, extending over the entire south-eastern region of the Arabian Peninsula. Competitors will have to face the added challenge of a marathon stage here, where they won’t have any external assistance from their teams overnight.

Registrations will remain open until October 31.

Digital roadbooks for everyone

Goodbye to paper roadbooks. Over the past few years, Dakar organizers have been introducing digital roadbooks, starting with the car, SSV, truck and T3 categories in 2021, and later elite riders in the bike and quad categories in 2022. For 2023, all vehicles across all categories will be equipped with this more advanced navigational tool.

Some stages will feature a mirror route, which means the route will be split into two with different waypoints to find depending on which roadbook each competitor is handed. The routes will be assigned randomly, discouraging those tempted to simply follow participants ahead of them. Participants will have to keep navigation on top of their priority or they could risk missing waypoints and incurring hefty penalties.

Winning a stage in the Dakar has often been perceived as a disadvantage for those competing in the bikes category because it means they have to open the stage the next day and essentially clean the route for those behind. This can result in major time lost, and as a result, some riders have often opted to voluntarily forego winning a stage.

Organizers have now announced a time bonus to those who open the stage in the bike category. The exact intricacies of how much time compensation should be awarded are still being worked out.

The Dakar Classic category, for vehicles made before 2000, will also continue to be part of the rally. Like always, competitors in this category will have their own dedicated route. The 2023 Dakar Classic route will feature 13 stages, two of which will be marathon stages. Organizers have also added a new ‘Average Speed’ class for less powerful vehicles.

Sam Sunderland and Nasser Al-Attiyah won the Dakar Rally this year in the bike and car categories. Representing the Indian contingent, both Hero MotoSports riders finished in the top 20. Harith Noah had retired on Stage 10, but was allowed to return under the experience class.

CV sales on the uptick in June 22